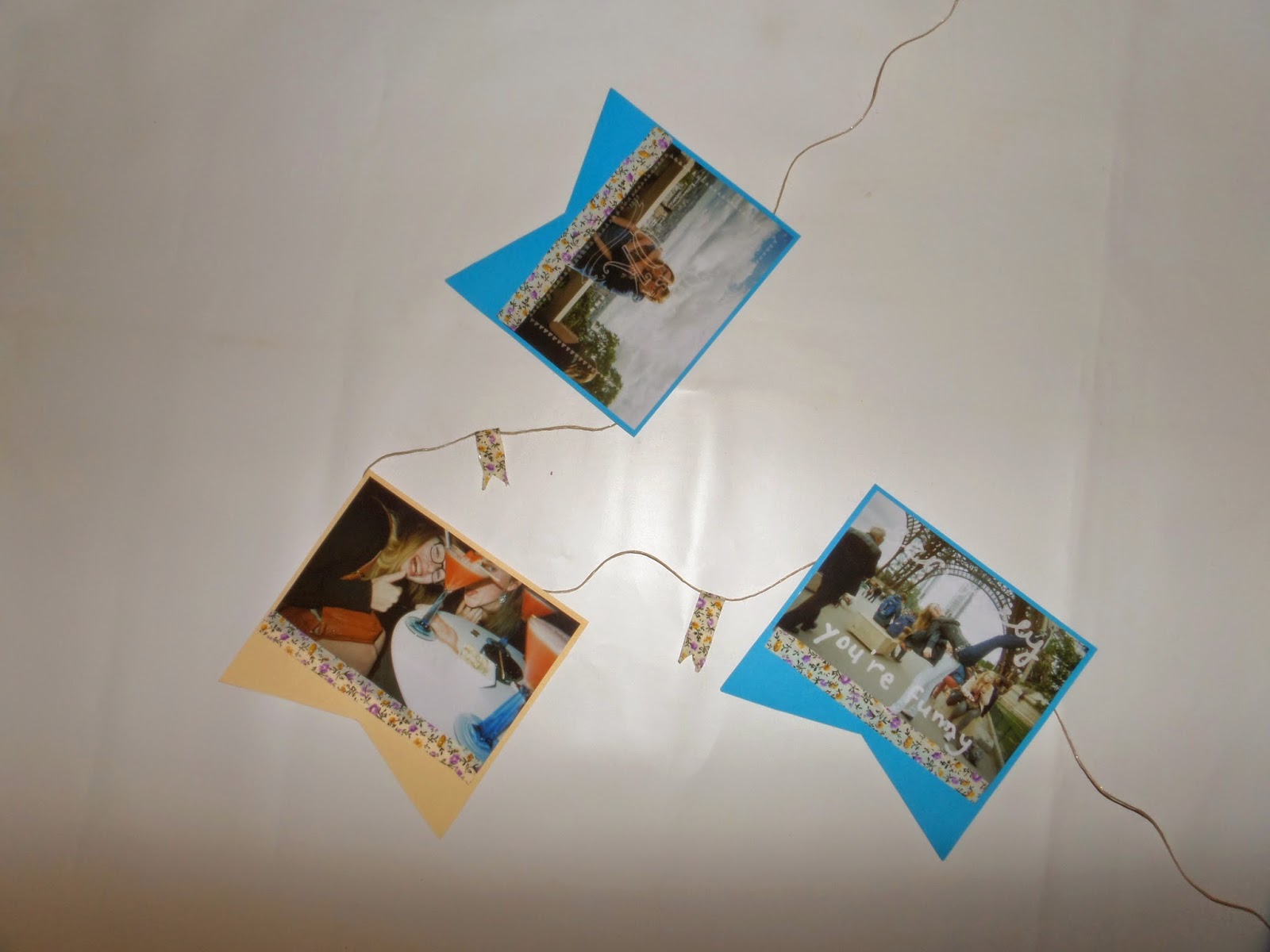 Summer break is ending, on Monday we're going back to school. That means that we'll have to sacrifice all our spare time to making homework, studying for tests and put all our creativity in weird projects (like 'turn this book into a modern painting' or 'write a poem about scotch tape'. Anyone else gets these tasks?) As I was thinking about that, I decided that in my last week of freedom I had to make a DIY. Since I had some photo's that needed a nice spot in my room, I made a photo garland.

If I didn't live in Amsterdam, I'd go there on holiday -K. Schippers 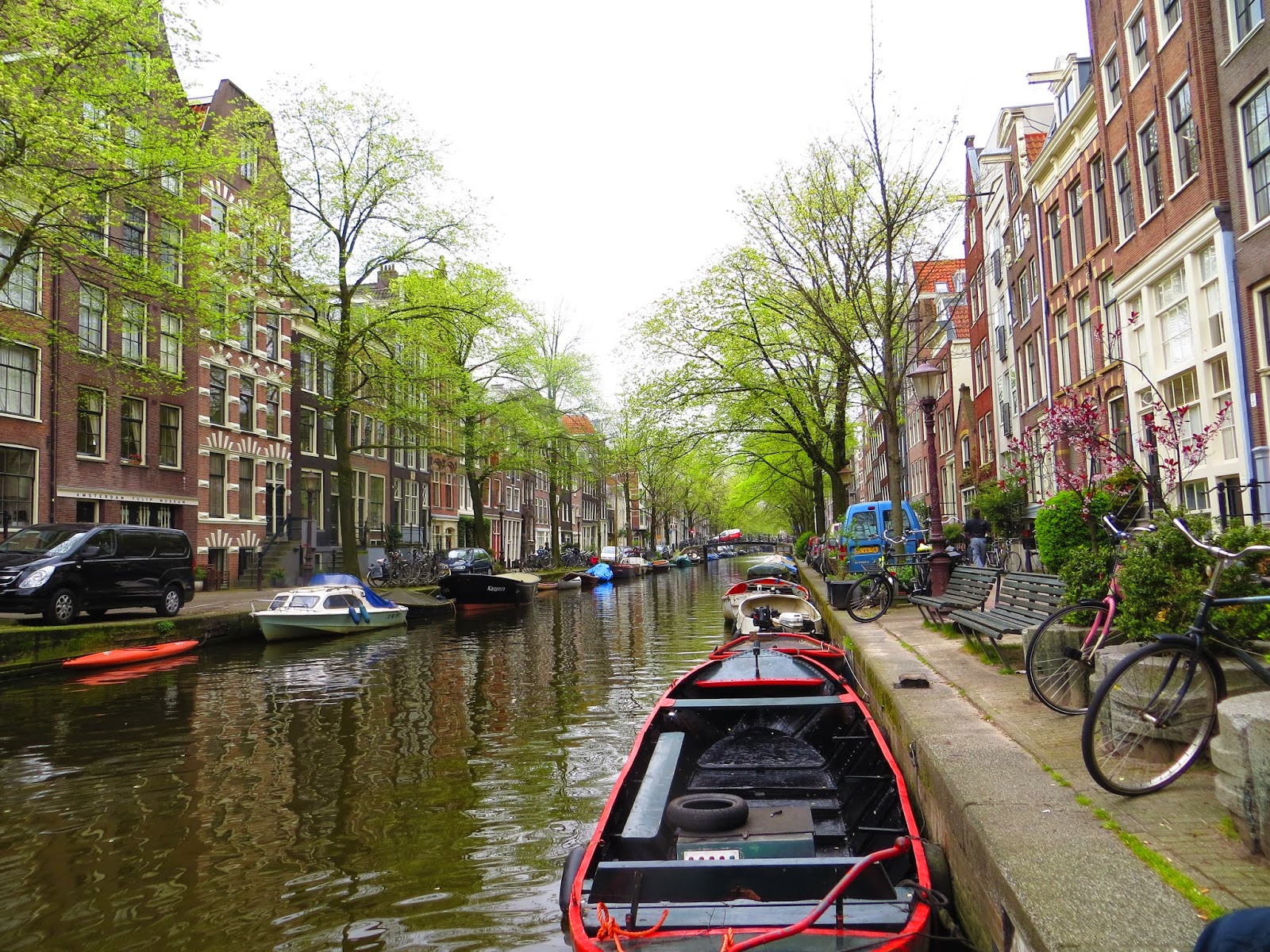 A while ago I went to Amsterdam for the first time in my life and in those three amazing days I've fallen in love with the City of Sin. I love the atmosphere there, you just feel free as a bird. Amsterdam truly is a wonderful place.

Unfortunately, this post is only interesting for people who live in Belgium or people who are planning to come to Ghent or Antwerp one day. For the others: maybe you will feel like coming  to Belgium only for this hot spot. ;)

The unicorns planned a trip to Antwerp! Of course we already went there many, many, many times to go shopping there, but now we wanted to discover more than the shopping streets, we wanted to find its hot spots. A few months ago, we already posted an article about 8 tea 5, which was also @ Antwerp. Today we are talking about Wok-A-Way, because you can't only drink bubble tea during the day, of course. These unicorns need some food in their tummy.

A lot of people have a smartphone, tablet or an MP3 with touch. What makes those devices special? Right, one of the reasons: you can download millions of apps! Who hasn't heard yet about Instagramming your food or doesn't know someone with a serious Candy Crush Saga addiction? I thought it was time to show you some lesser-known apps of which I'm really happy they exist.

It has been a long time since #3 of this item, but here I am again!

First thing you do when you wake up.

The first thing I do, well after I've hit the snooze button for too many times, is mostly just hurrying to the bathroom because I always make the same old mistake again and again: drink too much water right before going to bed. When I wake up at night because of that, I'm just so comfy under my sheets that I prefer racing to the toilet in the morning than getting up. After that, I take a cold shower.

First thing you do when you go the gym.

I'm so happy I can answer this question from now on and don't have to be like 'I don't go to the gym.'. Yay, a small victory! I always start with 20 minutes cardio, mostly bicycling or if I don't feel like bicycling that day, I have to start a fight with the other girls who also want to go on the treadmill. (sometimes the girl is called 'E'. Edit from 'E': I always win, MUHAHAHA)

First thing you do when you come home after a workday or school day.

Kitchen. Fridge. Food. I come home at 6 o'clock, so then I'm mostly hungry, not yet hangry. I quickly take something small to eat or drink before I check my social networks and mails.

Unfortunately, I'm still not allowed to drive, so I don't have a 'first' car. But if my parents are reading this: a Mini Cooper, Fiat 500 or Volvo C30 are fine for my birthday!

It was when I was young and still stubborn. We were travelling with the family to Germany by car and we were lost for a moment so my father decided to stop on a car park/square, we didn't really know what it was exactly. It was a long car ride, so as kid I wanted to move and play so I got out the car, ignoring my mother telling me that I couldn't do that. I started running and heard my dad, my mom and my sister chasing after me and I thought they wanted to play tag so I ran even faster, until I ran right in front of a car. Guardian angel, I thank you for that one, because I only had some bruises, nothing more.

First thing you wanted to be when you grow up.

My sister and I often played that we had a clothing store together and that we were very successful, so I wanted my own clothing store. Well, now I have a blog, so that's a small step in that direction.

Besides the clothing store, I also wanted to become a cook, a teacher, a doctor, a police officer, a singer or even more vague ' just famous'. Today I still don't know what I'll study next year... Help!

Water. Definitely water. I don't really like soft drinks or even sparkling water. Drinking water has so many health benefits for you, so why would I choose something else?

This one is really difficult. I have a special connection with desserts and don't want to offense any kind of dessert with my choice. Desserts, much love for all of you! Just kidding. When I was younger, I'd swear by pancakes, now I mostly go for crème brûlée. Why? Because I get so excited when I can hit on the caramel layer with the back of my spoon and because CARAMEL, that's why!

Ow, I'll sound very boring, but I was thinking about how much school work there is waiting for me on my desk. Sad thought.

My parents didn't allow me to buy things with my own money for quite some years, they wanted me to save money 'for later'. One day in the store, my mother got fed up with my nagging to buy something that she eventually let me. I bought a reindeer that could sing 'Merry Christmas' and dance. Yep. On reflection, I think it was a good thing that they didn't allow me to buy things right away...

Babysitting doesn't really count as a 'real' job, so my very first job was at the bakery where I still work! I always thought that that would be a nice job to do, and I wasn't wrong. Every week, I look forward to working again. I serve the customers and it's nice to see all the different kind of people: drunk people at 6 in the morning, old people that want to have a good talk, a man that hasn't much time, a mother with her children that only accompany her for the candy they will get etc. "Don't you have trouble to get up that early?" No, not at all. I've never been somebody that likes sleeping late in the morning, so I don't mind.

First time in a plane.

That was only two years ago. My mother is scared to travel by plane, so we have always travelled by car. My father wanted to go to Dublin for ages though and it would take too much time by boat, so we had to go by plane. After reassuring my mom over and over again and taking the necessary precautions, the moment for takeoff came. I found it very exciting and nice! It was a whole event for me actually, travelling by plane. I would do it over and over again, but my mom isn't from that thought. I guess we'll have to leave her home when we go to New York City...

Feel free to copy the tag, because I'm very excited to read about your first things!

Nail inspiration of the month. 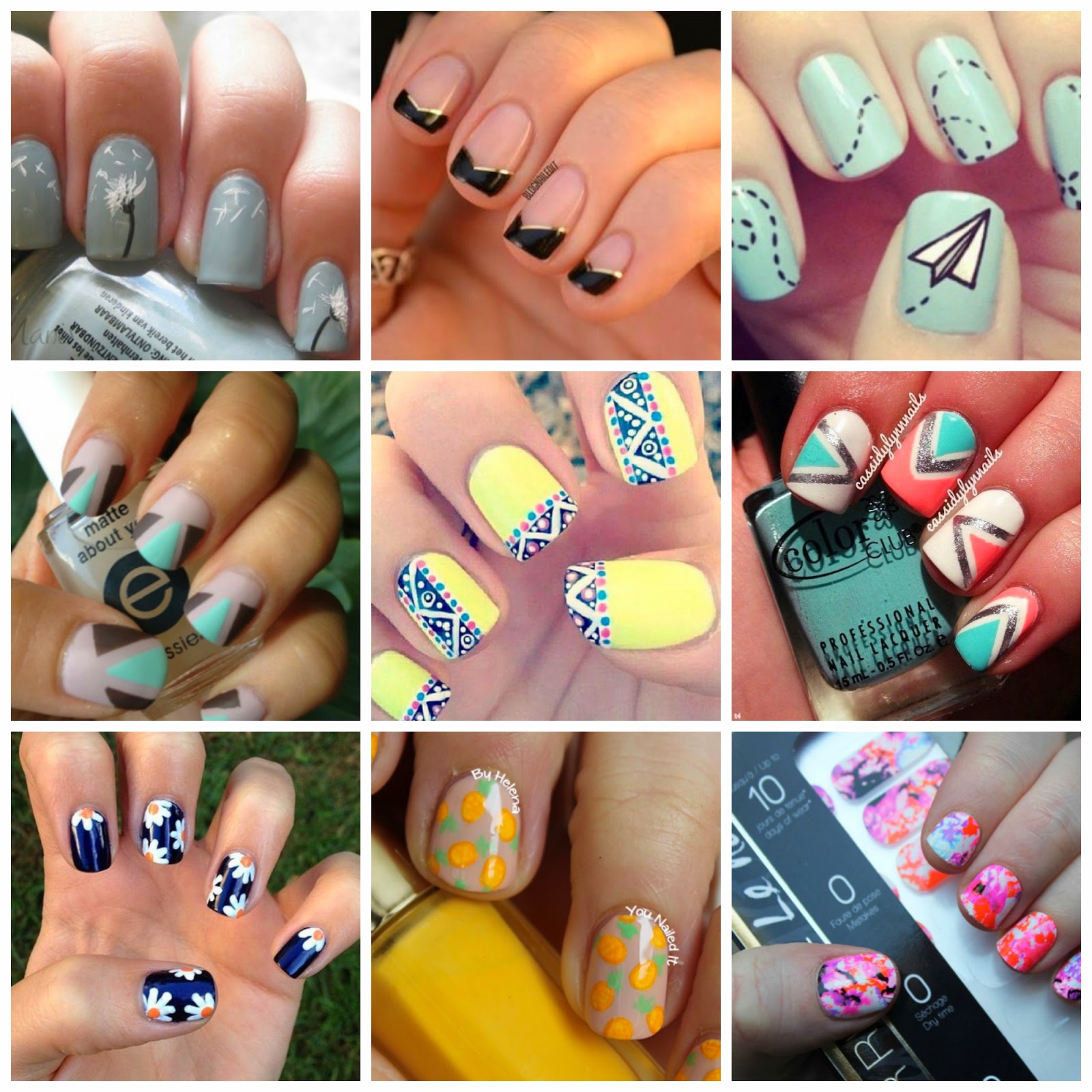 I've been doing the Nails of the month post for three months now and I'm already failing. Once a loser without perseverance, always a loser without perseverance, I guess. Haha. I had quite a busy month with a lot of schoolwork and just normal work, so I didn't really put any effort in my nails. If I painted them at all, I basically used a plain red or blue, so not really interesting to see, really. As I refuse to admit that I have failed my resolution of posting a monthly nails of the month, I'll do one with a twist. I figured I'd show you guys the nicest nail arts I stumbled upon on the interwebz this month. 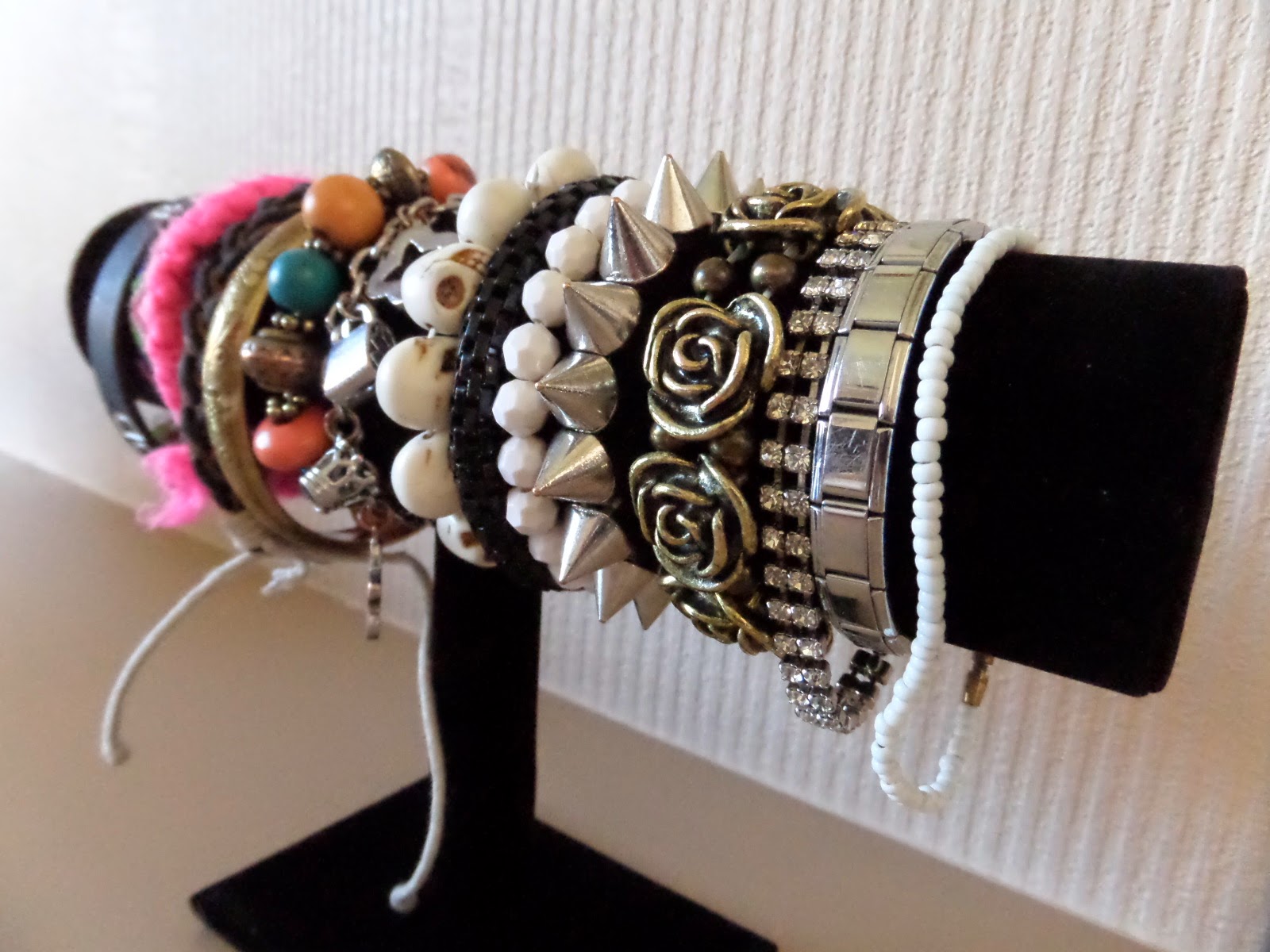 Lately I've really been into wearing bracelets and because of that my collection is slowly growing. After I just dumping them in a jar for a while I finally realised I needed some kind of bracelet holder. Just as I was thinking about my bracelet storage this beauty jumped into my eye. After staring at it for a little while I decided to take it home and cherish it for ever and ever. In all seriousness, I'm really over the moon with it.

Hanne and Eline
Hello and welcome to our blog. We write blogposts about everything you can possibly imagine. If you have suggestions or ideas for an article, you can always tell us.